Local Date and Time: Tuesday, 25 January 2022 |
Shree Swaminarayan Temple (Mandir), Perth, Australia Inc. was incorporated on the 25th day of July 2006 as a non-profit organisation. The organisation strives to propagate and promote the true and original precepts & tenets of the Shree Swaminarayan Faith ordained by Lord Swaminarayan together with other alms and objectives set out in the Organisation's Constitution.

Shree Swaminarayan Temple (Mandir), Perth, Australia Inc. belongs to a larger group of Swaminarayan Organisations and Temples around the world. The first Swaminarayan Temple in the world was built in India on land donated by the British Government over two hundred years ago. The Temple still exists in Ahmedabad and is used by thousands of devotees daily. Alongside the many Swaminarayan Temples in India, there are over 30 Temples located in major cities in North America, Europe and Africa.

In Australasia, there are established temples in Auckland (New Zealand), Sydney, and Melbourne along with chapters operating in Brisbane and Adelaide.

All of these Temples hold cultural and religious activities, where people attend and take part on a voluntary basis. These temples become a focal point for the community of Hindus living nearby. For some, as they get older, it becomes their life; a place where they can pray, meet people and find solace.

The followers of Lord Swaminarayan first arrived in Perth in the mid-80s. They organised small scale Satsang Sabhas (prayer meetings) and social functions at individuals' houses on a monthly basis. The Satsang prospered under the International Swaminarayan Satsang Organisation (ISSO) charter with regular visits from Moira Maharajshree and Maharajshree in the late 90s.

By 1998, the steady influx of followers to Perth meant that individuals' homes were no longer suitable to hold large gatherings. The founding members of the Satsang in Perth decided that bigger premises were required to hold regular Satsang Sabhas.

Initially, the community hall at the Scarborough Civic Centre was hired and Satsang Sabhas were held fortnightly on Sundays. As the community grew, the Sabhas were then held weekly and later moved to bigger locations, firstly to Dianella Scouts Hall for a number of years, thereafter to Hampton Senior High in Morley till current date.

In 2003, we were graced with the presence of Santos from Bhuj Mandir for the first time. From there on in, annual visits were organised with Maharajshree and Bhuj Santos.

As the Satsang grew in numbers and moved from one Community Hall to another, In December 2005, leaders of the Satsang decided to take up the task of establishing an organisation with the goal of building a Shree Swaminarayan Temple in Perth. In order to do this, the leaders approached Maharajshree and Mahant Swami for their blessings and commenced the work of drafting a constitution in December 2005.

A draft constitution was prepared in early 2006 and was put forward to Satsangis in June 2006 where it was unanimously accepted. The incorporation of Shree Swaminarayan Temple (Mandir) Perth followed in July 2006 with the first Annual General Meeting held on the 3rd of September 2006.

A year after the incorporation of the organisation, there were over 100 subscribed members and in excess of 300 ordinary members with significant growth forecasted. The organisation saw this as an opportunity to establish a firm base for the members and commenced the search for land with the view of building a Swaminarayan Temple in Perth.

Various options were considered including refurbishing an existing building or constructing a new building. Eventually, the property on Marshall Road, Bennett Springs became available. This property was a 10 acre block of affordable land in an area easily accessible to most of the Organisation's members.

In October 2007, the Organisation put in an offer for this land which was duly accepted. A broad plan for the purchase and development of this property was put forward to Maharajshree, Mahant Swami and the members of the community in Perth. The plan received overwhelming support and the funds required to purchase the land were raised in just under two months. The acquisition of this land was a watershed moment for the Satsangis as they realised that their dream of building a new temple for Lord Swaminarayan in Perth would come to fruition in the near future. Bhoomi Poojan was carried out in the presence of Swami Harijivan Dasji and Swami Balkrishna Dasji in February 2008.

Immediately after the purchase, the process for obtaining approval from the shire to build a new temple on the land commenced. In November 2009, the approval for change of use enabling construction for a place of worship was received from the City of Swan.

The building license application was submitted in June 2010 and approval was received in June 2011. The building of the Mandir was to be carried out using the 'Owner Builder - Design and Construction route. This arrangement allowed the Organisation to maximise seva (volunteer) input from the community members, which would result in substantial savings. 'Lakeshore Builders' was appointed as a licensed builder to construct the Mandir. In July 2011, site clearance was initiated along with the mobilisation of the earthworks contractor.

The Khat Muhurat Utsav (Foundation stone laying ceremony) took place in October 2011 in the presence of Maharajshree, Mahant Swami and elder Santos from Bhuj and guests from Australia and overseas. This event was a major milestone for the Organisation and gave the community the moral boost and financial impetus that was necessary to complete the building project.

Following the Khat Muhurat, the building works began in earnest with the external footings concreted with a ceremony where members of the community got the opportunity to write their names on the foundation stones. The Mandir slab was poured prior to Christmas 2011.

In January 2012, the concreters mobilised and commenced formation of the concrete tilt panels on site. Concrete tilt panels were lifted into place in March 2012 in the presence of Bhuj Mandir Santos, The majority of the work post the installation of structural concrete and steel was carried out as seva works (on volunteer basis).

At this time, the date for the Murti Pran Pratistha Mahotsav (opening ceremony) of the new temple was set in consultation with members of the community, Maharajshree and Mahant Swami. The chosen date was the auspicious day of Makar Sankranti on the 14th of January 2013. The planning for the opening ceremony began immediately with a Mahotsav sub-committee formed to organise the event.

A significant amount of co-ordination was required to ensure that the Mahotsav and Building works progressed hand in hand and the most efficient use of the Organisation's resources. As an example, the procurement of building materials, murtis and decorations from India was coordinated together.

All in all, 2012 was an extremely busy year for the Organisation with over 250 people involved on a volunteer basis in the construction of the Mandir and over 100 people involved in the planning of the Murti Pran Pratistha Mahotsav.

Shree Swaminarayan Temple Perth was practically completed in December 2012 with the occupation certificate granted in January 2013.

Most of the early settlers were residing North of Perth CBD and the Students on the South of the CBD. In 2007, Beechboro, Darch and Ellenbrook and the northern suburbs were most preferred for the local Haribhaktos for residency. Hence, the potential in interest and future growth was identified to be in the northern suburbs. Preference and interest was registered around the above noted suburbs. Eventually lot 247 on 211 Marshall Road, Bennett Springs was on sale. With assessment and strategy this property was put forward for perusal to Maharajshree, Santos and Haribhaktos. It was acceptable and the land pursued. This was a major milestone for Perth Satsangis and for the early settlers who were fortunate to observe the growth in our Satsang and more importantly a base in Perth.

Mandir site is approximately 10 acres of land located at 211 Marshall Road, Bennett Springs, WA 6063, Perth, Australia. Site is approximately 20Km from Perth CBD, neighbouring to Beechboro. Ellenbrook and Darch are approximately 15 minutes drive. Part of the site acquisition included a habitable 3 bedroom house, a large shed, operational bore system, an above ground concrete water holding tank, a stream passing across site. Prior to acquisition it was identified that we would have restrictions on being able to fully develop. This was factored into the development strategy which still enabled us to develop approximately 50% of the site. This was deemed acceptable and fitted nicely into the bigger picture.

Kitchen equipment has been locally sourced and installed by our seva trades. It is of commercial nature in following the necessary health standards but smart lined with stainless steel panels to soften and tenderise its look yet maintaining the fit for purpose and its use in line with durability and maintenance as part of the design.

At the side of the Mandir we have a standard male and female welfare facilities designed for its high traffic use and maintenance yet furnished to a specification that will not put us out of date. Disabled accessibility and welfare facilities are also available. To cater for Santos and Pujari, a 3 bed self-contained unit has also been incorporated as part of the Mandir for use.

Paintworks follow alongside cabinetry fit-off, followed by final services fit-offs ready for commissioning and testing. To break the walls and to provide continuity of the design flow, veneer panelling has been specified up to 900mm above floor level bordered by architectural dado and skirting detail.

The dining part of the hall is finished off with hardwood flooring sourced locally and laid & finished off by seva trades. The front part of the Mandir has been underlayed and carpeted for comfort and durability. Carpets are handmade and designed bespoke specially for the Mandir which is to its highest quality and specification.

Verandah floor tiles are sourced from China fit for purpose and of good quality. Colours are co-ordinated with the external finishes. Balustrade around on the external has been sourced from India to enhance the Mandir aesthetically. External facade is topped up with graffito coating finish which is fit for purpose in terms of colour choices, its maintenance and quality properties. The earthy finish flows with the landscape and its surroundings.

To make a statement and by following the norm the external Sikhars are designed and sourced from India along with architectural copings installed at parapet level. These have been designed bespoke and will be installed by our seva trades.

Main focus inside the Mandir are Bhagwan's various swaroops with all five deities being installed. Singhasan and Murtis are designed bespoke and sourced from India with help from Ahmedabad and Bhuj Santos. Singhasan will be in timber to flow with our co-ordinated finish with the veneer panelling. Murtis will be in marble to bring out the glow when set in timber Singhasan. Facing the Singhasan, the Murtis flowing from left to right manner include Hanumanji, Ram Parivar, NarNarayan Dev, Swaminarayan Bhagwan, RadhaKrishna Dev Ghanshyam Maharaj - in the centre alter, NarNarayan Dev, Swaminarayan Bhagwan, RadhaKrishna, Shiv Parivar. Shivling, Ganeshji and Suryanarayan Dev.

As you enter the Mandir premises from Marshall Road, a gated architectural arched passage structure sourced from India will direct cars and personnel via a mini roundabout towards the lit tarmacked car park area.

Welcoming fountain furnished with Shivji waterfall with soft landscaping surround will lead personnel to the Mandir's elevated entrance into the Mandir hall. Overflow car parking provision has been considered for bigger events by the side of the Mandir structure.

As part of the landscaping, provisions for future expansion recreational facilities and hobbies have been incorporated for all age groups including a full size open air volleyball court, grassed multi-purpose playing field, shaded sand pit with playing equipment, phool vadi for flower garden, saak vadi for vegetable garden, foot bridge over the stream and various footpaths caressing throughout the 10 acres of Mandir site. 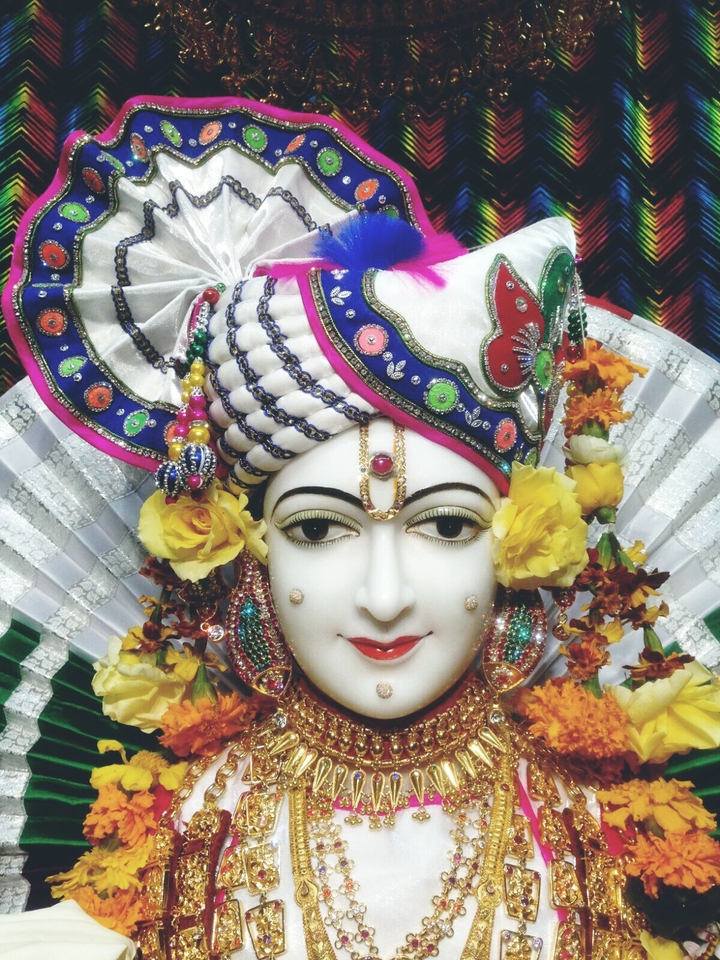 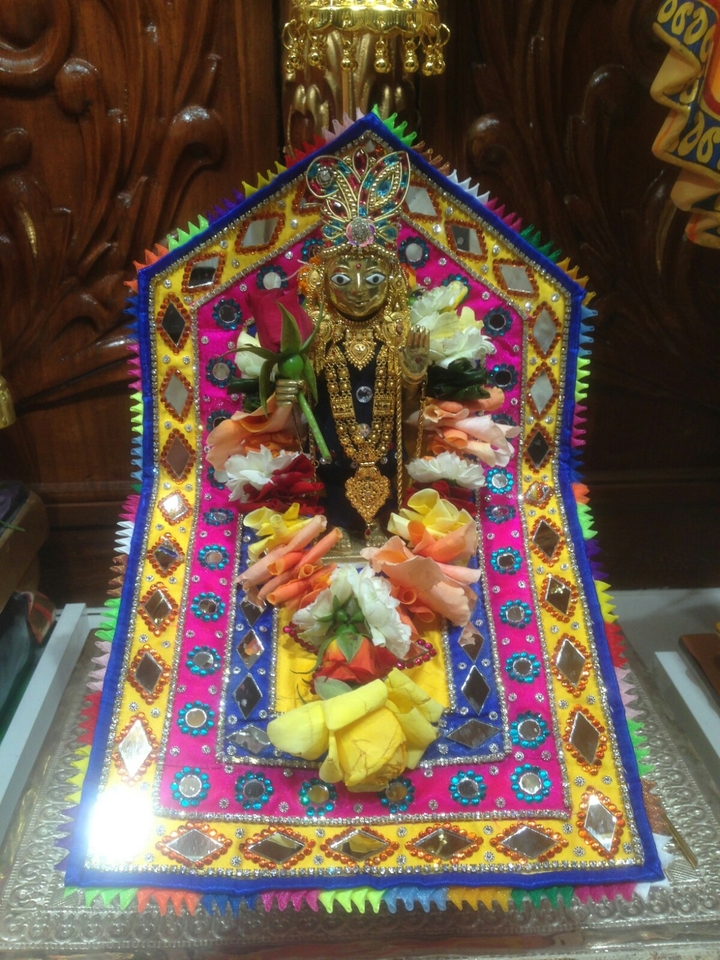 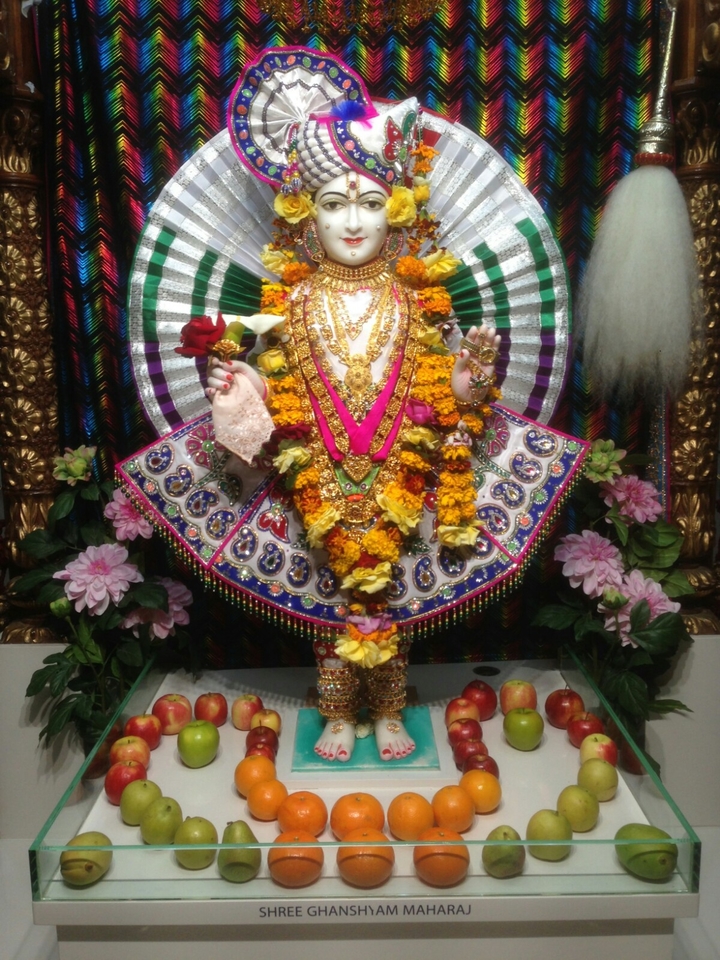 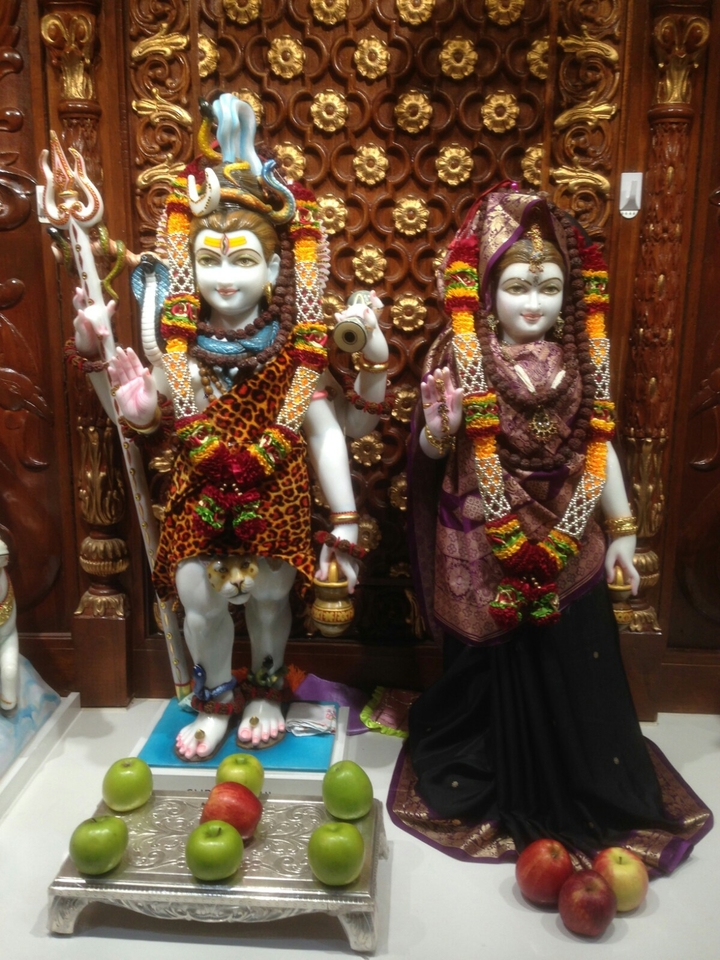