The followers of Lord Swaminarayan first arrived in Perth in the mid-80s. They organised small scale Satsang Sabhas (prayer meetings) and social functions at individuals’ houses on a monthly basis. The Satsang prospered under the International Swaminarayan Satsang Organisation (ISSO) charter with regular visits from Moira Maharajshree and Maharajshree in the late 90s.

By 1998, the steady influx of followers to Perth meant that individuals’ homes were no longer suitable to hold large gatherings. The founding members of the Satsang in Perth decided that bigger premises were required to hold regular Satsang Sabhas.

Initially, the community hall at the Scarborough Civic Centre was hired and Satsang Sabhas were held fortnightly on Sundays. As the community grew, the Sabhas were then held weekly and later moved to bigger locations, firstly to Dianella Scouts Hall for a number of years, thereafter to Hampton Senior High in Morley till current date.

In 2003, we were graced with the presence of Santos from Bhuj Mandir for the first time. From there on in, annual visits were organised with Maharajshree and Bhuj Santos.

As the Satsang grew in numbers and moved from one Community Hall to another, In December 2005, leaders of the Satsang decided to take up the task of establishing an organisation with the goal of building a Shree Swaminarayan Temple in Perth. In order to do this, the leaders approached Maharajshree and Mahant Swami for their blessings and commenced the work of drafting a constitution in December 2005.

A draft constitution was prepared in early 2006 and was put forward to Satsangis in June 2006 where it was unanimously accepted. The incorporation of Shree Swaminarayan Temple (Mandir) Perth followed in July 2006 with the first Annual General Meeting held on the 3rd of September 2006.

A year after the incorporation of the organisation, there were over 100 subscribed members and in excess of 300 ordinary members with significant growth forecasted. The organisation saw this as an opportunity to establish a firm base for the members and commenced the search for land with the view of building a Swaminarayan Temple in Perth.

Various options were considered including refurbishing an existing building or constructing a new building. Eventually, the property on Marshall Road, Bennett Springs became available. This property was a 10 acre block of affordable land in an area easily accessible to most of the Organisation’s members.

In October 2007, the Organisation put in an offer for this land which was duly accepted. A broad plan for the purchase and development of this property was put forward to Maharajshree, Mahant Swami and the members of the community in Perth. The plan received overwhelming support and the funds required to purchase the land were raised in just under two months. The acquisition of this land was a watershed moment for the Satsangis as they realised that their dream of building a new temple for Lord Swaminarayan in Perth would come to fruition in the near future. Bhoomi Poojan was carried out in the presence of Swami Harijivan Dasji and Swami Balkrishna Dasji in February 2008.

Immediately after the purchase, the process for obtaining approval from the shire to build a new temple on the land commenced. In November 2009, the approval for change of use enabling construction for a place of worship was received from the City of Swan.

The building license application was submitted in June 2010 and approval was received in June 2011. The building of the Mandir was to be carried out using the ‘Owner Builder – Design and Construction route. This arrangement allowed the Organisation to maximise seva (volunteer) input from the community members, which would result in substantial savings. ‘Lakeshore Builders’ was appointed as a licensed builder to construct the Mandir. In July 2011, site clearance was initiated along with the mobilisation of the earthworks contractor.

The Khat Muhurat Utsav (Foundation stone laying ceremony) took place in October 2011 in the presence of Maharajshree, Mahant Swami and elder Santos from Bhuj and guests from Australia and overseas. This event was a major milestone for the Organisation and gave the community the moral boost and financial impetus that was necessary to complete the building project.

Following the Khat Muhurat, the building works began in earnest with the external footings concreted with a ceremony where members of the community got the opportunity to write their names on the foundation stones. The Mandir slab was poured prior to Christmas 2011.

In January 2012, the concreters mobilised and commenced formation of the concrete tilt panels on site. Concrete tilt panels were lifted into place in March 2012 in the presence of Bhuj Mandir Santos, The majority of the work post the installation of structural concrete and steel was carried out as seva works (on volunteer basis).

At this time, the date for the Murti Pran Pratistha Mahotsav (opening ceremony) of the new temple was set in consultation with members of the community, Maharajshree and Mahant Swami. The chosen date was the auspicious day of Makar Sankranti on the 14th of January 2013. The planning for the opening ceremony began immediately with a Mahotsav sub-committee formed to organise the event.

A significant amount of co-ordination was required to ensure that the Mahotsav and Building works progressed hand in hand and the most efficient use of the Organisation’s resources. As an example, the procurement of building materials, murtis and decorations from India was coordinated together.

All in all, 2012 was an extremely busy year for the Organisation with over 250 people involved on a volunteer basis in the construction of the Mandir and over 100 people involved in the planning of the Murti Pran Pratistha Mahotsav.

Shree Swaminarayan Temple Perth was practically completed in December 2012 with the occupation certificate granted in January 2013.

07. Giradhari Re Sakhi
by Perth Mandir 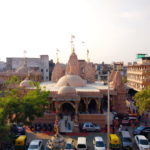 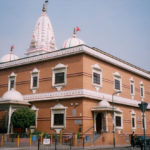 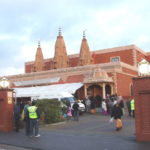